Here is a list to get you started on your summer reading, courtesy of Dr. Bill Yarchin, the Dean’s Endowed Professor of Biblical Studies in the School of Theology (this list originally appeared in APU Life in the Winter 2011 issue):

Joel R. Primack & Nancy Ellen Abrams, The View From the Center of the Universe: Discovering Our Extraordinary Place in the Cosmos (Riverhead Trade, 2007).

Michael Pollan, In Defense of Food: An Eater’s Manifesto (Penguin, 2009).

Po Bronson, Why Do I Love These People? Honest and Amazing Stories of Real Families (Random House, 2006).

Eliza Griswold, The Tenth Parallel: Dispatches from the Fault Line Between Christianity and Islam (Farrar, Strauss, and Giroux, 2010).

May is Asian-Pacific American Heritage Month

Asian-Pacific Heritage Month  began through a congressional initiative as a House resolution to proclaim the first ten days of May as Asian-Pacific Heritage Week. A similar bill was passed shortly thereafter by the Senate.  President Jimmy Carter signed a Joint Resolution designating the annual celebration on October 5, 1978.  President George H.W. Bush signed an extension making the week-long celebration into a month-long celebration in 1990. The official designation of May as Asian-Pacific American Heritage Month was signed into law in 1992.

There is a terrific website that a variety of government agencies have put together to help celebrate the month. These include resources from the Library of Congress, National Archives, National Endowment for the Humanities, the Smithsonian Institution, National Gallery of Art, National Parks Service, and the US Holocaust Memorial Museum. You can find it here.

We have many resources on Asian Americans and religion. Here are just a few items from our collections that might be helpful as we honor this month:

New titles added to the theological collections in April.

END_OF_DOCUMENT_TOKEN_TO_BE_REPLACED

April 22nd is the 44th celebration of the national Earth Day movement. Begun  in 1970 by Senator Gaylord Nelson, it was hoped that encouraging public awareness about air and water pollution would bring it to the national political agenda. You can find information about Earth Day and it’s history here.

We have a great many resources on nature, ecology, and faith. Here are a few selections:

Holy Week has begun …a time for remembering the darkest and the brightest days on the Christian calendar. I thought I would share this poem as a means of remembrance…

Three short days of twilight and darkness,
dawn and the light. The elements, free
of all knowledge, unblessed by prediction, yet sensed the
suspense —
Creator entombed by creation, the loftiest heights
brought low, the universe madly askew. Three
short days with the length of three endless nights.

Three times, forced by its nature to shine
the sun reluctantly rose. In the skies no sign
through clouds of a bow. The earth which knew not how
its Maker turned Captive had been yet felt the wrong.
The winds whistled dirges. Three endless
Days — then the groan of creation exploded in song.

Mark A. Noll
From A Widening Light: Poems of the Incarnation

This was selected for inclusion in the Nelson’s Anthology series:
The Cross: An Anthology
Thomas Nelson Publishers, 2003 (pp 122-123).

Posted in Literature and Poetry, This Week in Church History | Leave a comment

Sponsored by the American Library Association, all kinds of libraries – universities and seminaries (like ours), elementary and high school, public libraries and special (corporate, law, medical) all use this week to celebrate the many ways lives can be changed at your library.

The celebrations first began in the mid 1950s – when it was feared that people spent more time listening to the radio and watching television than reading books (I guess only the technologies have changed…).

A few fun facts about our library:

So now, in line with the theme of the week – how has your life changed in using the library? Any fun stories to share?

Here are a few titles from our collections that celebrate libraries: 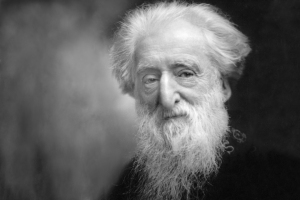 Born on April 10, 1829, William Booth along
with his wife Catherine, founded the Salvation Army.

Booth was born in Nottingham, England and spent his early years apprenticed to a pawnbroker, giving him the opportunity to see poverty firsthand. He was a convert to Methodism at age 15 and studied to become a Methodist lay preacher and evangelist.
At 23 he left the work of the pawnshop to become a full-time preacher at Binfield Chapel in Clapham. He married Catherine Mumford  in June 1855. Over the next few years, he became a prominent Methodist evangelist but was regularly asked to serve in pastorates.
He requested that he be freed up for evangelistic work but the request was repeatedly denied and so he left the Methodist Church to become an independent evangelist. 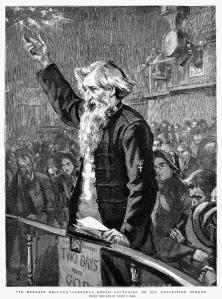 In July 1865, he was invited to preach at a tent gathering near the Blind Beggar public house at Whitechapel. He preached a salvation message to all who would hear. Later that year he and Catherine began the Christian Revival Society in London – holding meetings nightly and on Sundays. The society was later renamed The Christian Mission and continued with this name until 1878, when renamed The Salvation Army.

During his lifetime, Booth established the work of the Salvation Army in 58 countries and colonies. He died (promoted to glory) on August 20, 1912. The Salvation Army considers it’s founding date July 2, 1865 – the date of Booth’s first preaching at Whitechapel.

While most of our resources are kept in this special collection, a few resources are available for general circulation and include:

Green, Roger Joseph
The Life and Ministry of William Booth:
The Founder of the Salvation Army
Abingdon Press, 2005.
.
.

National Poetry Month was begun in 1996 by the American Academy of Poets to annually celebrate poetry and the important place it has in American culture. The organization has a terrific website with 30 Ways to Celebrate  and includes clever ideas like “Watch a poetry movie” and “Take a poem to lunch.” There are many creative ideas throughout the website – you can take a look at all of the suggestions here.

Meanwhile, I thought I would highlight some of our resources in the Stamps Library related to poetry. We have a great many titles, particularly in the area of Hebrew Bible, as well as titles related to faith integration. The following is a sampling:

Ballinger, Phillip A.
The Poem as Sacrament:
The Theological Aesthetic of Gerard Manley Hopkins
Peeters, 2000.
.
.

The Stamps Library has a (growing) collection of faith integration books. Where possible, this is a second copy of a title, with the first copy located within the discipline circulating collection. With this “set-apart” collection the intention is to assist faculty in easily locating resources within their discipline but also to see relevant near disciplines and the ways in which they approach faith integration. These books are located on the second floor on the low shelving near the periodical display area.

These are the newest resources added to our Korean language collections at the LA Regional Center library. As you scroll through the list you’ll see a number of resources for research and writing skills, particularly for D.Min students. Where possible, an approximate translation of the title is included.